Open source icon Mozilla Firefox has grown to command a substantial level of market share within the Internet browser marketplace. Due to the free software’s unique nature as an open source project, updates to improve functionality and bug fixes are frequent. Maximizing the adoption rate of Firefox’s latest version is important in order to maintain the security of its users, while also ensuring that the software’s millions-strong user base won’t be shut out on some of the latest and greatest features available on the Web. To visualize the rate of adoption, Chitika Insights tracked how many people have switched over to the 12th version of Firefox since April 24 – covering its first week of wide release based upon share of ad impressions within the Chitika network for each version of Firefox.

Our data confirms that users of Firefox 11 were the most likely to switch to version 12, with percentages remaining relatively constant for Firefox 3 (18%), Firefox 10 (4%) and all other versions (16%). 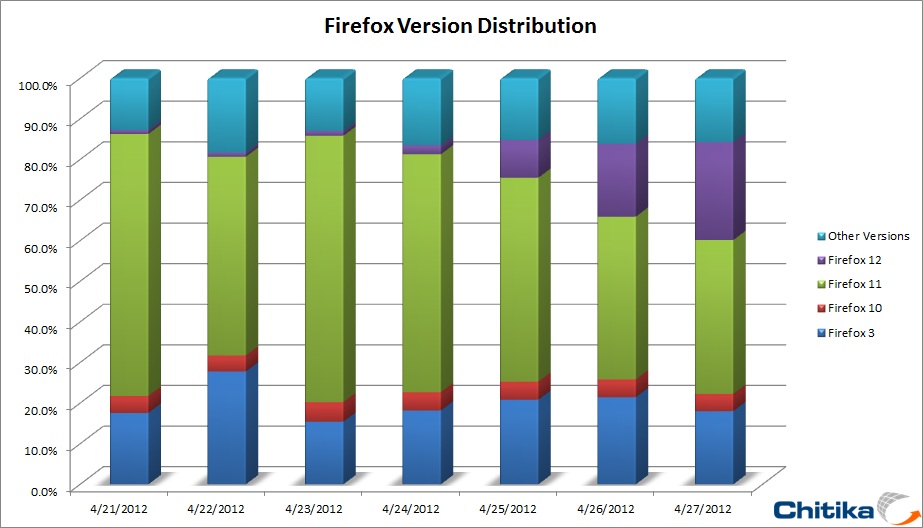 While the level of version 11 to version 12 adoption is promising, it is troubling from a functionality standpoint that more than a third of users still browse using old software. With inherent compatibility issues, the Web experience can be impacted and cause users to switch browsers, which could be partially responsible for Firefox’s loss in market share and rank as the second-most popular browser in the U.S. and Canada (Google Chrome now controls 20% as compared to Firefox’s 15%).

Since the initial period of observation, version 11 usage has dropped to just over 9%, with version 12 now accounting for nearly 57% of all Firefox traffic – more than double its share in the first week. For a look into this evolving distribution of Firefox version usage, be sure to check out our live tracker at https://labs.chitika.com/firefox12.

Stay tuned to Chitika Insights as we track the progress of Web browsers as new versions of Internet Explorer, Chrome, and others are introduced over the year.

Looking to create canva mockups but not sure where to start? Poll the People is here to help! We offer a free signup so you can test our platform and see how easy it is to create beautiful mockups. So what are you waiting for? Sign up today and start creating!

Study: Apple iPad Accounts for 94.64% of all Tablet Web Traffic