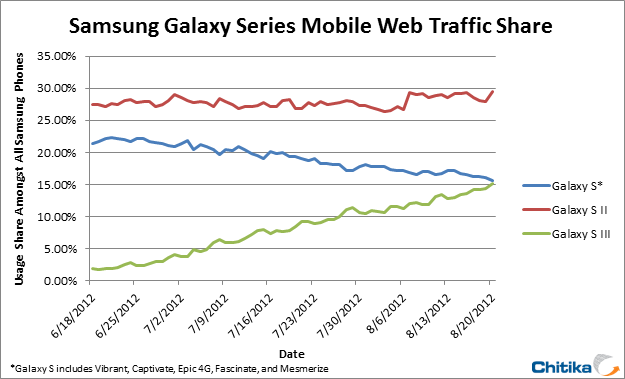 According to recent analyst reports, Samsung continues to lead the worldwide marketplace in mobile device sales, followed by Nokia and Apple. The Korean company’s most recent success was its Galaxy S III, which exceeded expectations by selling over 10 million units and becoming one of the most popular smartphones during the first half of 2012. While in North America iPhone users still generate more Web traffic in than all Android users combined, Samsung and its Galaxy S III have presented one of the biggest challenges for Apple in the smartphone marketplace.

The last report published by Chitika Insights showed the Galaxy S III representing 11.23% of all Samsung smartphone Web usage through Aug 6th, 2012. With the phone’s popularity still growing, Chitika Insights conducted another study examining the hundreds of millions of smartphone impressions during the last two weeks, from August 7th, 2012 to August 20th, 2012.

As seen in the graph below, the Galaxy S III has maintained a steady rate of Web usage growth. In the last two weeks, the phone’s usage share grew nearly 26% – from 12.07% of all Samsung mobile phone traffic to 15.17%. After surpassing the Nexus back in June, the S III will soon blow past the Galaxy S to become the second-most popular Galaxy smartphone. The small bump in Galaxy S II usage around August 7th is likely due to the significant online price drop for that phone that day.

This impressive growth for Samsung’s flagship smartphone will get its biggest test with the upcoming September launch of the iPhone 5. That device’s rumored features have been one of the hottest topics in the tech world, and considering Apple’s sterling track record with product launches, we’re anticipating a lot of volatility around its release.

Sign up for free to test on Poll the People and help us create checkout pages that are easy to use and fast. With your help, we can make sure that everyone has a great experience when shopping online.

What Hours Are Mobile Users Most Active?