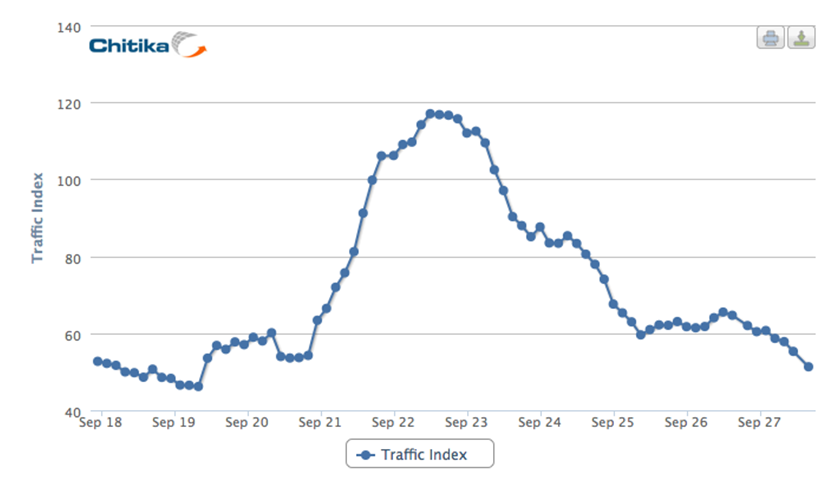 Mid-morning September 20th, Google+ officially entered public beta, drumming up the level of interest of the site far and wide across the web. Although able to boast 25 million unique visitors after only four weeks of operation, Google’s newest attempt at a social network saw its user base dwindle as shown by a recent article from Chitika Insights.

To continue our coverage on this matter, Chitika Insights took a look at Google+ before and after it went public to see if the social network was living up to the hype. Reportedly, Google+ saw a surge in traffic of over 1200% due to the additional publicity, but the increased user base was only temporary, as was projected in an earlier insights post.

The data shows that, on the day of its public debut, Google+ traffic skyrocketed to peak levels. But, soon after, traffic fell by over 60% as it returned to its normal, underwhelming state. It would appear that although high levels of publicity were able to draw new traffic to Google+, few of them saw reason to stay.

Given the huge amount of publicity and resources Google+ has received, why hasn’t the social network taken off?

Despite its striking new interface, rapid release of new features, and focus on user interaction, Google+ does not seem to be able to drive unique visits in a sustainable fashion. We believe there are two driving reasons for this lack of interest:

Google has recently been taking steps toward diversifying its services such as introducing Hangouts to Google+ or incorporating its search engine into the social network. Other innovative features include a new +1 button for ads and search results to increase relevancy of its product mix to its users. Perhaps if Google can accelerate their current pace of innovation on their social network offering, Google+ could becoming a competitive alternative to its arch-rival, Facebook. Otherwise, given Facebook’s clout and reputation of rapid innovation, Google+ might just be left in the dust.

In light of recent questions about the methodology used for this post, we have published the following explanation, viewable here.

Sign up for Poll the People and get instant feedback on your website colors from real people! Our easy-to-use tool makes it quick and easy to get the opinions of your target audience, so you can make the best choices for your business. Try it for free today!