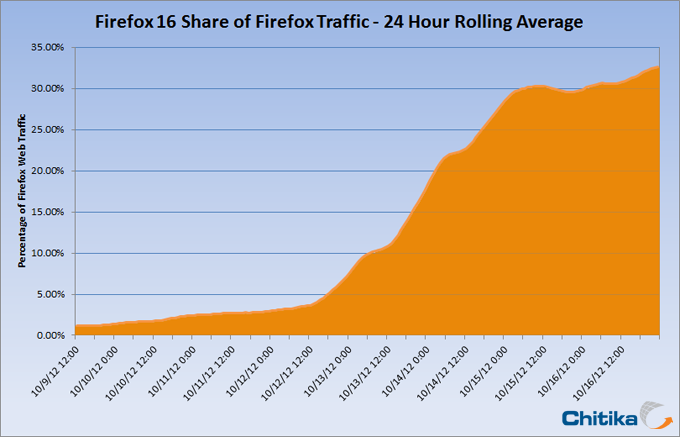 Mozilla released its newest version of the Firefox Web browser last Tuesday, October 9th, 2012. Firefox 16 touted several security fixes over the previous version, 11 of which were rated “critical”. Unfortunately, this version had a major security issue of its own, which prompted Mozilla to remove the download from its page just a day after initially releasing it. The software was patched and re-released  less than 24 hours later as Version 16.0.1.

At Chitika Insights, we were interested in seeing what percentage of Firefox users had updated to version 16 before the fix, and how the issue may have affected adoption rates. To quantify this study, we conducted a user agent analysis on millions of mobile ad impressions, from October 9th through October 16th, 2012. Looking solely at impressions coming from Firefox browser versions, we were able to observe the growth in usage of Firefox 16 since its release:

Based on our data, it seems that Mozilla caught the issue before a large portion of their users had updated to the new version, limiting the number of individuals who were operating with security vulnerabilities. Soon after the repair and re-release, adoption rates appeared generally unaffected, with three days of sharp increases in traffic share. Usage continues to increase slowly, and as of October 16th, 2012, Firefox 16 makes up nearly one-third of all Firefox traffic: 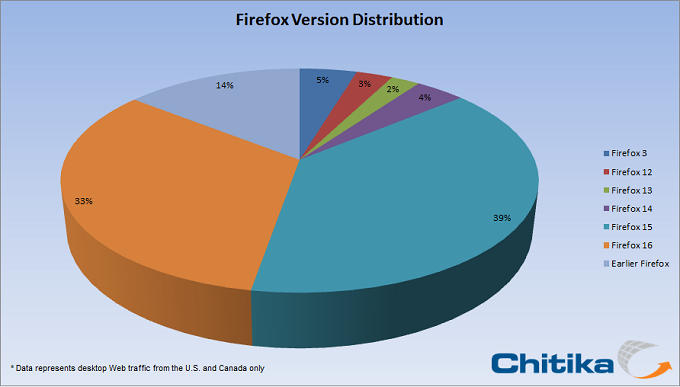 Mozilla’s swift response to protecting the privacy of its users has effectively counteracted the negativity associated with the security hole. Although helped along by the automatic update feature embedded in recent versions, there has been no measurable push back from users in terms of updating – Firefox 16 is on track to be just as successful as previous versions in terms of adoption rate.

How to Improve Website Color Palette Using Usability Testing? Looking to improve your website’s color palette? Usability testing is the way to go! And our Poll the People service is the perfect place to start. Sign up for a free account today and you’ll be able to test your website with real users. They’ll provide feedback on what colors work and don’t work, so you can make your site more user-friendly. Don’t wait – sign up now and start improving your website’s color palette today!

iOS 6 Adoption Levels Out, Surpasses 60% One Month After Launch

Is Mac OS Lion the King of the OS Animal Kingdom?

Traffic for Google+ on the Rise Along with User Count