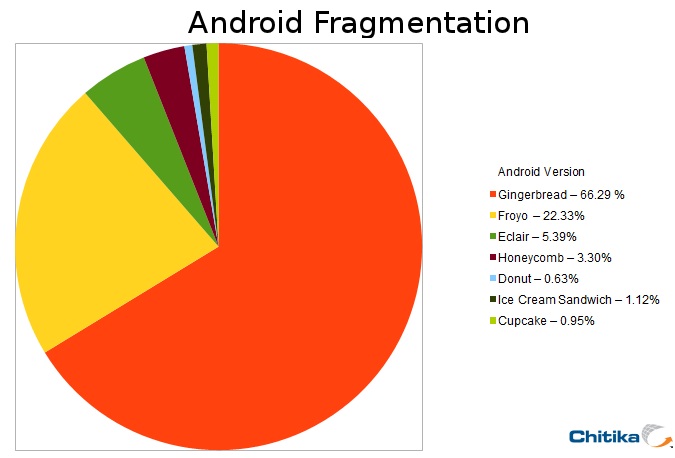 Android’s open nature is one of its key draws, for developers and users alike. The flexibility of its open standards provides incentive for developers to utilize the platform, given its reach to such a wide range of devices. In comparison, Android’s largest competitor, Apple’s iOS is a tightly controlled system, all its development held firmly under Apple’s management. There are positives and negatives to each approach, with flexibility and customization traded for a uniform experience and the ability for Apple to keep a consently high quality check on every application that comes down the line.

With Android’s open nature, though, come some drawbacks. An open-source platform makes it hard to enforce the upgrades that come out, when they debut, and as each successive version of Android emerges, the OS has well-publicized issues with fragmentation. By the end of last year, though, Android has been making strides in combating the fragmentation issue, but is it enough?

Chitika Insights investigated the current state of Android’s fragmentation across mobile devices, checking in to see how much progress they had made in achieving market permeation with the latest versions of Android. Taking a sample of tens of millions of impressions from our network over the course of a week, we measured each Android version’s share of the traffic to estimate how the adoption rate for each version, as seen in the chart below:

The majorities of Android users are indeed on the same platform – Android 2.3.x, commonly called Gingerbread, and dominates the share with 66.29%. That still leaves a large amount of room for other versions to clutter the market, though, and Gingerbread is not Android’s most up-to-date release. Android’s latest version, Ice Cream Sandwich (release 4.0.x), arrived for public consumption in November of 2011. Thus, the large majority of Android users are one or more updates behind Android’s latest OS version. The latest version has seen a slow rate of adoption. As yet, our analysis shows only 1.12% adoption rates of this most recent version, up only slightly since our last study on January 20, 2012 where Ice Cream Sandwich was only seen on .4% of devices. As time goes on and more major manufacturers start pushing Ice Cream Sandwich with their newly released phones, this gap may close – but will it only close until the newest Android version comes out?

Despite the comparisons between Android and iOS, on the fragmentation issues it is a difficult comparison to make. Unlike the iPhone or iPad, which are single products being controlled by a single manufacturer, the Android OS is not controlled by a single distributor. It is released on myriad devices over myriad manufacturers and will be spread over dozens of different products each year rather than only one phone and only one tablet. This inherent diversity of products may make Android’s strength perpetually its weakness. It has taken steps to overcome it, but if these steps will ever be enough to get past the variegation built into such an open system is something we will have to see in time. You can be sure Chitika Insights will be there, keeping track and keeping you up to date on the latest Android developments.

Looking to avoid website design mistakes? Usability testing is key! And we make it easy with our free signup. Just head to Poll the People and get started today. You’ll be able to catch errors and make sure your site is user-friendly before you launch. So don’t wait – sign up now and avoid those costly mistakes!