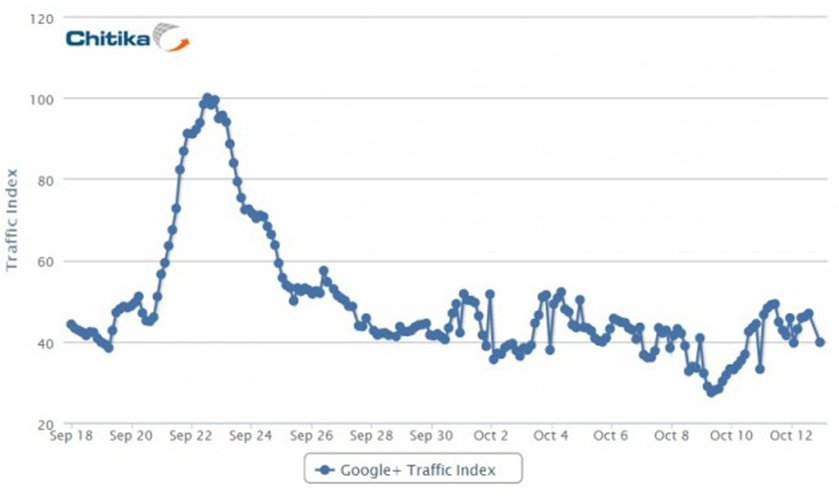 Over the past few days there has been a lot of buzz surrounding our coverage of Google+, particularly focusing on the measured 60% downward trend we saw in the site’s traffic. To continue our investigation into this matter, Chitika Insights researched traffic patterns of the social network to determine whether the downward trend we witnessed was a short term fluctuation as some proposed, or just the beginnings of a long term trend.

As it turns out, our data shows that the trend seems to be continuing. After a brief blip in Google+’s traffic surrounding the site going public, we saw a prolonged and sustained downward trend in overall activity coming from the site. At its greatest, the gap between peak and trough measured over a 70% decline in traffic.

Why wasn’t Google able to sustain its publicity fueled user base? Here are some of the thoughts we had (some of which were mirrored in this post made by a Google engineer):

It will be interesting to see if Google+ will be able to claw its way up through the ranks of social networks in the coming months. If Google is able to implement a platform which supports the development of a network of services which promotes user activity and accessibility, they may be successful in reversing this downward trend. Or, perhaps not — but only time will tell . . .

If you are interested in how we got these numbers, check out this recent post which details our methodology.

Looking to add a little extra something to your wardrobe without spending a lot of money? Check out our free signup to test on Poll the People and get access to the best color hacks! With our helpful tips, you’ll be able to experiment with different colors and find the perfect combination for you. So what are you waiting for? Sign up now and start testing!

Study: Apple iPad Accounts for 94.64% of all Tablet Web Traffic

What If AT&T and T-Mobile Actually Merge?