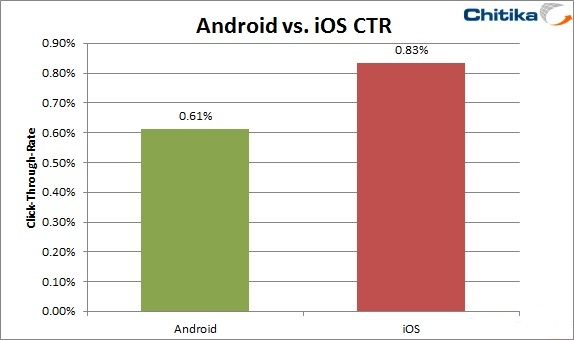 Study: iOS Users Click on Ads 33% More than Android; CTR up 10% Since April

Travel website Orbitz recently found that Mac users were 40% more likely to book a four or five-star hotel as compared to PC users, and are now displaying more luxurious travel options for Mac users accessing their site. Orbitz’s strategy highlights a growing move towards segmentation in the online space, and how new technology is changing the ways in which people access the Internet. As our latest Web tracker shows, mobile traffic is now a constant force during non-working hours. With these continuing trends in consumer usage, Chitika Insights conducted a research study of mobile users, investigating the online ad click-through rate (CTR) of both iOS and Android users.

Using data collected from hundreds of millions of ad impressions observed the week of June 12 through June 19, Chitika Insights analyzed the patterns of mobile users. The graph below provides a visualization of the differences in CTR between those accessing the Web through Android or iOS.

The data illustrates a higher CTR among iOS users than Android users, with the former clicking on ads about 33% more frequently. Most astoundingly, while the CTR on Android devices has remained fairly stable, iOS users are now clicking on ads at rates about a full 10% higher than what we observed in an April 2012 study. Along with Orbitz’s findings, this indicates how large discrepancies in online behavior are more common than they may seem, and can be actionable. With the continuing expansion of mobile usage and the mobile advertising market, understanding the browsing patterns of mobile consumers will be increasingly crucial to attaining marketing success.

In conjunction with the numbers seen in the live tracker, which shows both iOS and Android mobile phone traffic approaching near-identical levels, it becomes clear why iOS remains the most attractive option when it comes to the mobile advertising space. Not only are its users very active on the Web, but they also click on ads at a much higher rate.

Keep an eye on Chitika Insights in the future as we continue to track important trends in the mobile sphere.

Looking to create a CTA button that actually works? Look no further than Poll the People. Our free signup allows you to test your buttons on real people to see what works best. So why wait? Sign up today and see the results for yourself!

iPad Still Leads Tablet Market for Web Traffic; How Does the Competition Stack Up?