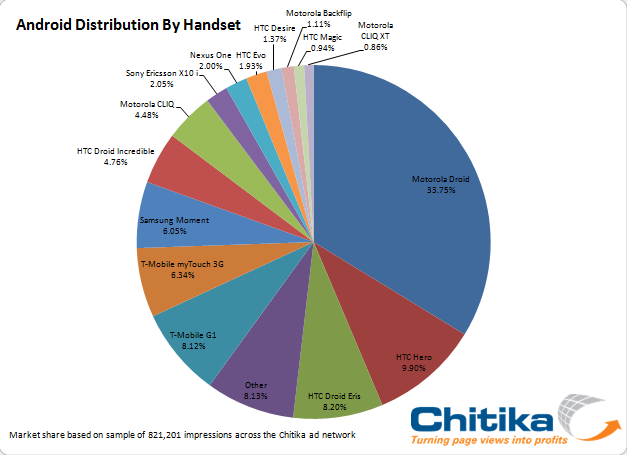 Which Android-based smartphones are ruling the market?  According to new data from online ad network Chitika, the Motorola Droid is by far the most popular handset, and Sprint’s newly released HTC Evo has made enough of a splash to catch the Google-branded Nexus One.

The Droid’s dominance is no surprise – the device has been in the market since November of 2009, backed by an overwhelming advertising and marketing campaign and bolstered by the tech frenzy of holiday shopping.  It currently accounts for just over a third of all Android traffic.  What is surprising is that the Evo – launched on June 4th – has already reached 1.93% of the Android market, swiftly catching up with the Nexus One (2% of the market), Google’s first self-branded and self-promoted mobile device.

Among the cellular networks, Verizon has so far taken the most advantage of Android’s popularity, with Verizon phones accounting for 49% of Android traffic coming into the Chitika network.  T-Mobile ranks second with 23%, followed by Sprint with 19%.  AT&T, which has seen great success as the iPhone’s exclusive network, contributed a mere 1.1% of Android traffic to the sample looked at for this study – even less than U.S. Cellular, which clocked in with 1.4%. 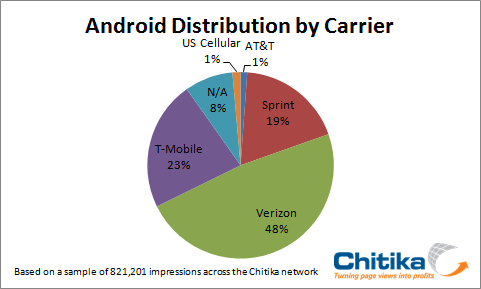 In order to come up with these results, Chitika looked at a sample of 821,201 impressions from the first two weeks of June coming into their advertising network.  It should be noted that, true to Android’s open-source and incredibly diverse nature, some 8% of the operating system’s traffic in the sample was from unrecognizable devices or devices with extremely low usage.  Cellular provider market share is based on the provider most strongly associated with individual handsets (for the purposes of this study, Nexus One is considered a T-Mobile device).

Sign up for free to test on Poll the People and help us solve the problem of mistakes with concepts! Your feedback is essential to making sure our product is the best it can be. Thank you for your support!

iPhone Carrier Wars: Verizon up to 12%

Why The Verizon iPhone is the Ultimate Threat to Android

The Current State of Windows Phone 7