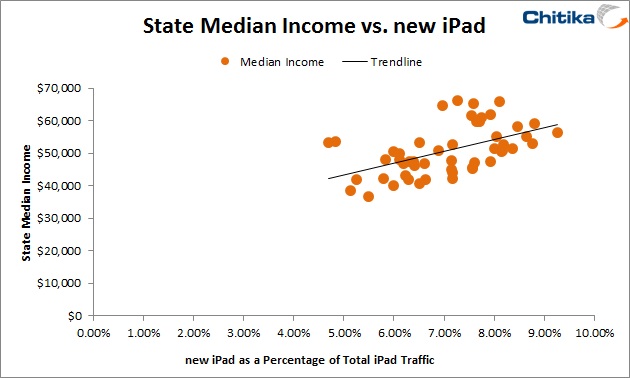 When you think “tablet” what do you really think of?  For most people it’s the iPad.  Since the release of the original iPad in 2010, its name has become synonymous with “tablet”.  Apple has done a tremendous job marketing the device to the young and old, and over the past two years, they have convinced countless organizations that an iPad is essential to learning, business, healthcare, and a wide variety of other fields.

According to the Chitika Insights iPad Tracker, The new iPad accounts for just over 9% of all iPad traffic.  This figure is not too shabby considering the device has only been available to the public for a month.  Just days after The new iPad was released, sales figures topped 3 million devices.  Chitika Insights has been reporting on The new iPad since it launched in March, and our interest in the rapid adoption rate for this newest iteration has led us to further investigate the volumes of data we are seeing on our vast network.

Our latest study was conducted in order to examine what conclusions we can draw from the state-by-state breakdown of overall new iPad share seen on our iPad Tracker.  Specifically, what relationship income has to adoption rates for The new iPad on a state-by-state basis.  We utilized U.S. Census Bureau information combined with data pulled from the Chitika network to determine what, if any, correlations can be found.  We determined that there is in fact a close relationship between states with high median income and a high share of new iPad traffic.

The top five States with highest share of new iPad traffic were California, Hawaii, Nevada, Washington D.C., and Washington State.  These states also fall into the category of high median income levels, as determined by the U.S. Census Bureau.  That being said, it is evident that the greater the degree of affluence in a geographic locale, the higher the likelihood that people in that region are going to spend discretionary income on a new Apple iPad.

Digging deeper into our data, we found an interesting trend in regard to new iPad traffic and geographic location.  By categorizing states as either coastal or inland, we were able to ascertain that coastal states have a higher rate of new iPad adoption versus those located inland.  This finding further supports our previous assertion that there is a relationship between median income and new iPad adoption rate.  By taking an average of both coastal and inland median income, we found that coastal median income is over 10 per cent higher than that of states categorized as inland.

Going forward, it will be interesting to see if the trend of affluence and new iPad traffic remains persistent.  We will revisit the topic should the price of the latest generation iPad drop to determine if there is any change in traffic share, even in the states with lesser median income levels.

Looking to create a CTA button that actually works? Look no further than Poll the People. Our free signup allows you to test your buttons on real people to see what works best. So why wait? Sign up today and see the results for yourself!

What If AT&T and T-Mobile Actually Merge?