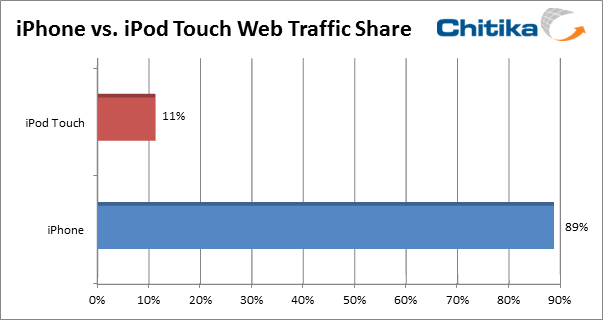 The iPod Touch has a striking resemblance to the iPhone – the unit is built with near-identical hardware and both devices share the same operating system (iOS). Its most dramatic difference from its more popular cousin is the lack of an antenna that can connect it to cellular networks. This makes the iPod Touch slightly thinner than iPhone models released in the same generation. While some iOS features are disabled, when the iPod Touch has access to Wi-Fi it is capable of browsing the Web just like an iPhone.

Due to the similarities of these two devices, Chitika Insights conducted a study to compare the Web usage rates between them. To quantify our latest study, we conducted a user agent analysis on hundreds of millions of ad impressions from August 29th, 2012 to September 4th, 2012. Looking solely at impressions coming from iPhones and the iPod we were able to compare the volume of Web traffic from each device.

Between the two devices, the iPod Touch has a respectable 11% of Web traffic even with far fewer devices sold – 46.6 million as compared to 149.7 million for the iPhone. The ability to access the Internet while avoiding a costly monthly data plan could be why many browse extensively with the iPod Touch, even if it is only at a Wi-Fi hotspot. Taking into account carrier subsidies, both devices have similar pricing, and the comparatively high rate of iPod touch Web usage indicates a growing desire from consumers to have portable devices with Internet access in the face of these costlier cell phone data plans. However, the findings indicate that near-ubiquitous connectivity does matter, as iPhone users browse the Web on their device 150% more than iPod Touch users.

Looking for the perfect font for your next project? Look no further than Poll the People! With our free signup, you can test out fonts with real users to find the perfect one for your needs. Don’t waste any more time searching through endless font options – sign up for Poll the People today!

The Current State of Windows Phone 7

Why The Verizon iPhone is the Ultimate Threat to Android

96% Of Publishers Not Monetizing Mobile Traffic… Yet