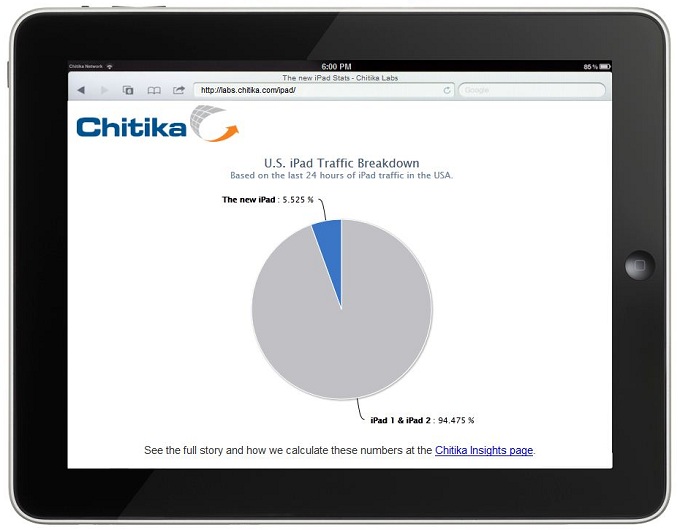 After much anticipation on Friday March 16th, 2012, The new iPad hit the market and proceeded to shatter first weekend sales records, moving 3 million units over the course of the weekend — the most successful launch for the iPad yet. Although “The new iPad” sported only a few major differences (most notably screen resolution) from earlier generations, thousands of consumers and Apple fans alike lined up around the block to be among the first with their hands on the product. As of 2 PM on 3/20/2012, “The new iPad” represents 5.52% (average of the last 24 hours) of all iPad traffic, according to Chitika Insights. Prior to the release of official numbers by Apple, Chitika Insights’ iPad Tracker was and remains one of the only methods available to track “The new iPad” adoption rate across the US in real time.

With Silicon Valley regarded as the long standing capital of tech in the US, it is no surprise that California leads the country in adoption of “The new iPad” with a 6.3% share of traffic. Connecticut follows closely behind with an adoption rate of 6.1%. Another notable includes New York, where “The new iPad” represents 5.65% of all iPad traffic, positioning the state as the fourth friendliest state to the new product. The graph on the next page includes a table that shows the states with the top adoption rates in the country.

Generally, it appears that coastal states tend to lead the way in adoption rates while more central states have lagged thus far. Stay tuned to Chitika Insights and keep an eye on our iPad Tracker to chart “The new iPad’s” growth in the coming weeks.

Report: Future of Firefox Unclear; 25% of Users Lag Behind in Version Updates