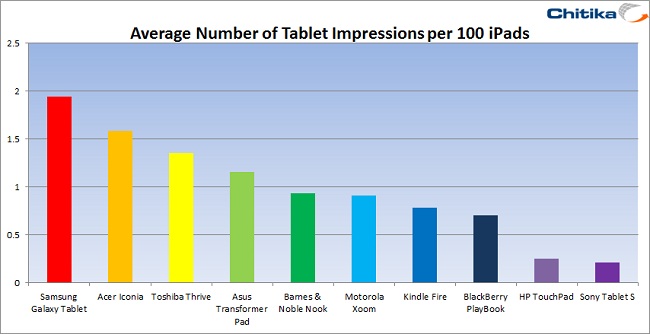 According to a U.S survey by Frank N. Magid Associates for the Online Publishers Association, the ownership of Android tablets has almost closed the gap of iPad ownership. This study reports that 52% of tablet owners have an iPad, and 51% have an Android tablet (there are some tablet owners with both an iPad and an Android). If true, then Chitika Insights’ data indicates shocking differences in their Web use – iPad users generate almost 9x more Web traffic than Android tablet users.

To quantify this study, Chitika Insights took a sample composed of hundreds of millions of impressions from the Chitika Ad network; ranging from June 4 to June 10, 2012. A user agent analysis was then conducted on this sample of data to determine the distribution of impressions across devices classified as tablets. The data was then relayed in accordance to the average number of device impressions per 100 iPad impressions. A table depicting the results of this study can be seen below:

This extreme difference may, in part, be explained by the fact that some Android tablets are eReaders first and tablets second, like the Barnes & Noble Nook and Kindle Fire. These smaller and lower-resolution tablets likely discourage frequent and extended Web use. This also indicates that Android tablets are not the primary Web access device for many of its users.

It should also be noted that Android runs on a wide range of tablets made by many different manufacturers. The Android tablets with the greatest Web traffic shares can be seen in the graph above.  Because of the diversity in the Android tablet market, it is harder to peg down the type of users buying those devices and the way they are utilized. But because of the similarity of iPads, it is clear that either the iPad is a more primary Web access device, or iPad users spend a greater amount of time surfing the Web.

For ad providers, this asymmetric Web traffic means that tablet ad optimization for the iPad should provide the greatest benefit, and take a priority over Android tablets. It also appears that Android tablets are being used more for other functions than Web use.

Looking for the perfect font for your next project? Look no further than Poll the People! With our free signup, you can test out fonts with real users to find the perfect one for your needs. Don’t waste any more time searching through endless font options – sign up for Poll the People today!

Chromebook Struggles To Make its Mark

Room for Growth: Microsoft Surface Only Generates 0.13% of All Tablet Web Traffic